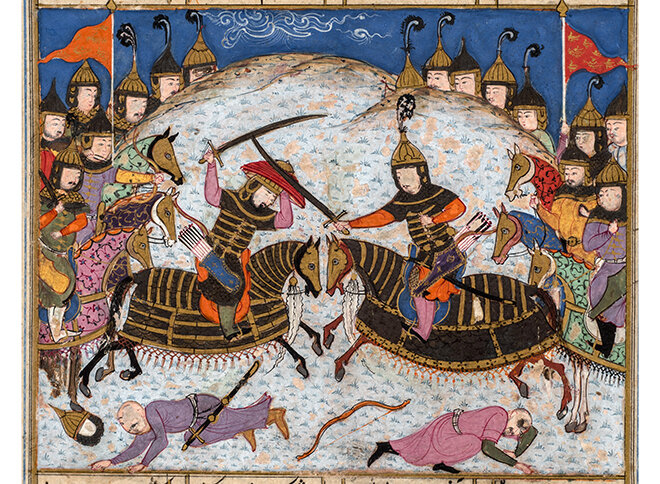 TEHRAN – The State Museum of Oriental Art in Moscow is showcasing artworks inspired by Nezami Ganjavi, the Persian poet who lived during the 12th and early 13th centuries.

The exhibition entitled “Plots and Images of Nezami” has been organized to celebrate the 880th birthday of the great Iranian poet.

About 60 museum items and artworks from private collections, including manuscripts, Persian paintings, graphics and illustrations, are on view at the exhibition, the museum reported.

The museum has erroneously called Nezami an Azerbaijani poet. However, his masterpieces have entirely been composed in Persian, without even a verse in the Azerbaijani language.

The artworks represent the truly boundless influence that Nizami’s works have had and continue to have on the fine arts.

The exhibition, which comes to an end on Monday, has been organized to showcase how the humanistic ideas and aesthetic images of Nezami have been perceived and artistically interpreted in the culture of people around the world in the Middle Ages and modern times.

A rare manuscript of Nezami’s masterpiece Khamseh (The Quintuplet), which is kept at the Central Library of the University of Tehran, was registered on UNESCO’s Memory of the World Register list in 2011.

Nezami’s reputation rests on his Khamseh which is a pentalogy of poems written in Masnavi verse form (rhymed couplets) and totaling 30,000 couplets.

These five poems include the didactic work Makhzan ol-Asrar (The Treasury of Mysteries), three traditional love stories of Khosrow and Shirin, Leili and Majnun, and Haft Paykar, and the Eskandar-nameh, which records the adventures of Alexander the Great.

Best known as Nezami Ganjavi, Abu Muhammad Ilyas ibn Yusuf was the greatest romantic epic poet in Persian literature, who brought a colloquial and realistic style to the Persian epic.

Photo: A Persian painting representing a story from Nezami’s works on display in an exhibition at the State Museum of Oriental Art in Moscow.