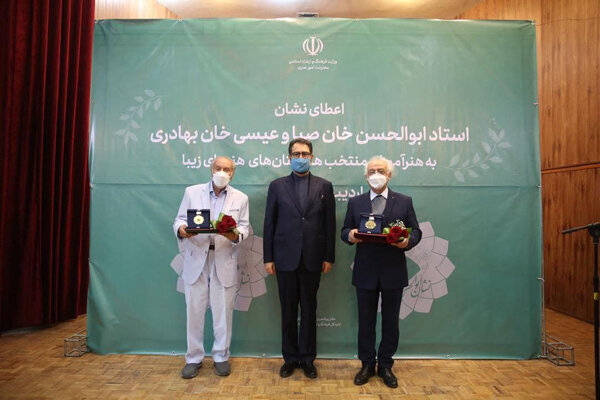 TEHRAN – The Ministry of Culture and Islamic Guidance honored maestro Taqi Zarrabi and painter Amir-Hushang Jazizadeh on Sunday for their lifetime achievements in training several generations of students.

Zarrabi received the Abolhassan Khan Saba Medal, and Jazizadeh was decorated with the Isa Khan Bahadori Medal, both of which are being awarded by the Art Planning and Education Office of the Culture Ministry for the first time this year.

The honoring ceremony was organized on Iran’s Teachers’ Day at the Girls’ Music Academy with a limited number of guests due to the COVID-19 pandemic.

One of the medals has been named after Saba (1902-1957), a renowned Iranian composer, violinist and setar player who was best known for his efforts to train many students that turned into the most prominent figures of Iranian music, including Hossein Tehrani, Hassan Kasai, Gholamhossein Banan and Farhad Fakhreddini.

Another medal has been named after Bahadori (1905-1986) who was an eminent Persian painter and was the director of the Academy of Fine Arts in Isfahan for over 30 years. He is one of the most influential figures in the restoration of traditional Iranian arts.

Many students were trained by him when he presided over the Academy of Fine Arts. His artworks are currently on view in several prestigious museums in Iran and several other countries.