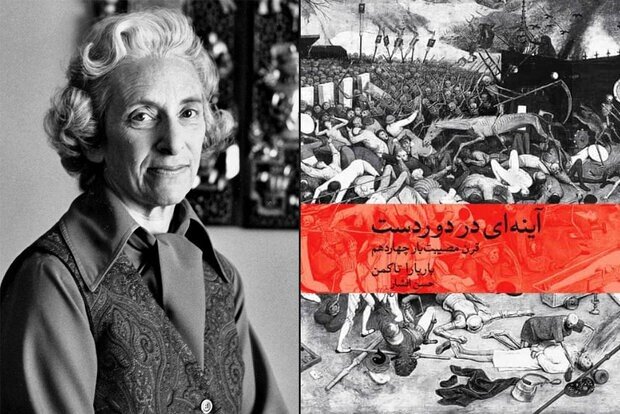 Mahi is the publisher of the Persian translation and Hassan Afshar is the translator of the book first published by Alfred A. Knopf in 1978. It won a 1980 U.S. National Book Award in History.

The book’s focus is the Crisis of the Late Middle Ages, which caused widespread suffering in Europe in the 14th century.

Drawing heavily on Froissart’s Chronicles, Tuchman recounts the histories of the Hundred Years’ War, the Black Plague, the Papal Schism, pillaging mercenaries, anti-Semitism, popular revolts including the Jacquerie in France, the liberation of Switzerland, the Battle of the Golden Spurs, and various peasant uprisings.

She also discusses the advance of the Islamic Ottoman Empire into Europe, which ended in the disastrous Battle of Nicopolis. Yet Tuchman’s scope is not limited to political and religious events.

She begins with a discussion of the Little Ice Age, a change in climate that reduced average temperatures in Europe well into the mid-19th century, and describes the lives of all social classes, from nobility and clergy to the peasantry.

Much of the narrative is woven around the life of the French nobleman Enguerrand de Coucy. Tuchman chose him as a central figure partly because he lived a relatively long life and could therefore stay in the story during most of the 14th century.

A French noble who married Isabella, the eldest daughter of Edward III of England, Coucy had ties to both France and England, and was therefore close to much of the action.

Tuchman was a self-trained historian, author and double Pulitzer Prize winner. She became best known for “The Guns of August”, a history of the prelude and first month of World War I.

As an author, Tuchman focused on producing popular history. Her clear, dramatic storytelling covered topics as diverse as the 14th century and World War I, and sold millions of copies.

Photo: This combination photo shows American historian Barbara Tuchman and the front cover of her book “A Distant Mirror”.