TODAY'S ALL NEWS
Previous Breaking: Monthly export from Kerman province rises 306% yr/yr
Next Breaking: $4.8b of non-oil income injected to NIMA in a month 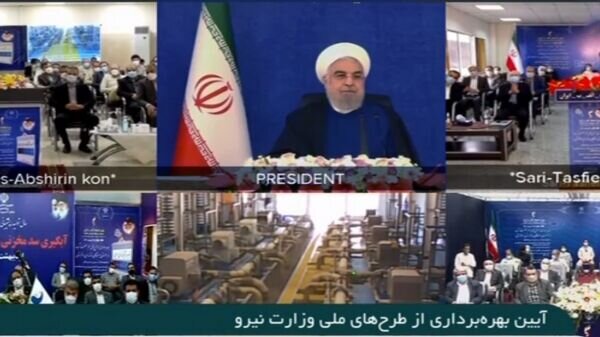 The projects were inaugurated under the framework of the Energy Ministry’s A-B-Iran program and also as part of the series of inaugurations made by the president over the past year and in the cuurrent Iranian calendar year (started on March 21).

The president also ordered the beginning of a project for constructing another dam in Mazandaran province in which nine trillion rials (about $214.2 million) is going to be invested.

The first phase of the A-B-Iran program (the acronyms A and B stand for water and electricity in Persian) was initiated in the Iranian calendar year 1398 (ended on March 19, 2020), during which 220 major projects with a total investment of 335.6 trillion rials (about $7.99 billion) were put into operation across the country.

In the second phase of the program that was carried out in the previous Iranian calendar year (ended on March 20) 250 water and energy projects worth 500 trillion rials (about $11.9 billion) were inaugurated in several provinces.

The third phase of the program was officially started on April 6 and like the previous phases, this year, too, the Energy Ministry is planning to inaugurate numerous water and electricity projects in various provinces every week.

In the first week of the third phase, Iranian Energy Minister Reza Ardakanian inaugurated five major electricity projects worth 29 trillion rials (about $690.4 million) across the country to mark the beginning of the third phase of the ministry’s A-B-Iran program.

The inaugurated projects comprised of 8,142 sub-projects including numerous electricity supply projects, as well as power network modification and optimization projects.