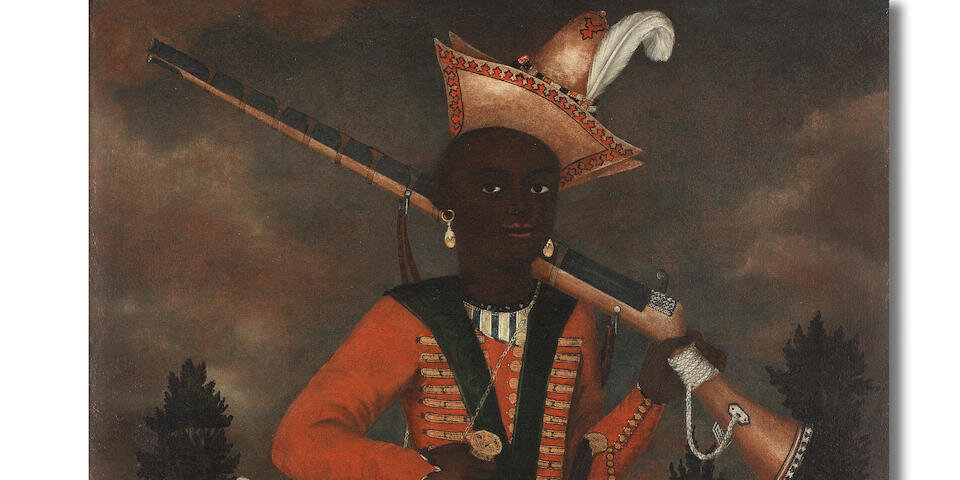 TEHRAN – London auction house Bonhams has recently announced that the first known Persian oil painting of an African figure was sold during its Islamic and Indian art sale for $515,000 (Ј375,250).

The rare artwork is a portrait of an African soldier painted by an anonymous Persian artist, and it is understood to be the first Persian art work of an African figure as well as one of the most historical art works depicting the African community, which is present to this day in the Persian Gulf region.

According to Bonhams, the painting belongs to the years between 1680 and 1690, and it displays a young African man dressed in a European style uniform of a soldier equipped with Persian weapons and tools.

While the auction house has confirmed that the figure’s identity is unknown, however, there have been several theories of him being a real-life soldier or a Safavid army “tofangchi”, which means musketeer in Persian.

“The artist has captured the soldier’s confidence in his status and profession and dress, creating a well-to-do, almost dandyish, image” said Oliver White, the head of Bonhams’ Islamic and Indian Art section.

Referring to the origins of the African man depicted in the painting, White also said, “He may have come via the Arab trade from East Africa and the Indian Ocean into the Persian Gulf; he could have been freed as a condition of service in the Persian army, or he may simply have been a free man who had ended up in the city, like so many others.”

The auction house has estimated that at least 21 other similar paintings are known to exist portraying the Safavid costume, and there are theories of possibilities that this painting may have a companion piece depicting a female African figure in the same style.

Bonhams is one of the world’s largest privately owned auctioneers of fine art and antiques based in London and founded in 1793. It is also known to be the oldest auction house in the UK.

Photo: A rare Safavid oil painting of an African soldier.