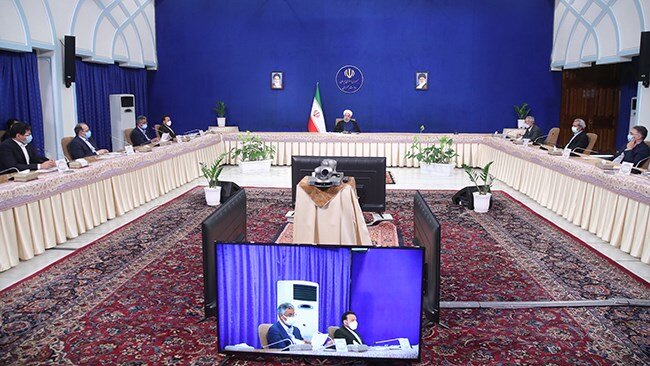 TEHRAN – Iranian President Hassan Rouhani, on Monday, attended a meeting with the representatives of the country’s private sector at the place of Iran Chamber of Commerce, Industries, Mines and Agriculture (ICCIMA) to discuss economic issues.

Speaking in the meeting, Shafeie underlined some of the country’s major issues in the economic sectors including the country’s water shortage and drought as well as the issues related to the stock market.

Mentioning the country’s water situation in the current Iranian calendar year (started on March 20) the official said: “The first important point is the situation of the country in terms of water shortage this year and the serious risks of its advancement; The amount of rainfall [since the beginning of the current water year] up to April 21 has been only 113 mm, which is 43 percent less than the average of 199 mm last year; On the other hand, no province has received more than average rainfall so far.”

According to Shafeie, the rate of rainfall decline is very high in many provinces. For example, the rainfalls in Khorasan Razavi province during this water year have decreased by 58 percent, for Fars province 50 percent, Kerman province 70 percent, Kermanshah 47 percent, and Hormozgan 90 percent.

Even in Golestan province, rainfalls have decreased by 42 percent and in Gilan and Mazandaran provinces a 20 percent decrease in registered.

“Based on forecasts, the crop year 1399-1400 can be called the driest year in the last forty years,” the official said.

“In such a situation, access to water supply will be limited and economic sectors are facing serious problems which will become even more difficult if it is not managed.”

The second issue that the ICCIMA head addressed was the problems faced by the stock market, about which Shafeie said: “What is important now is restoring the government’s credibility and the people’s trust in the stock market as a healthy institution.”