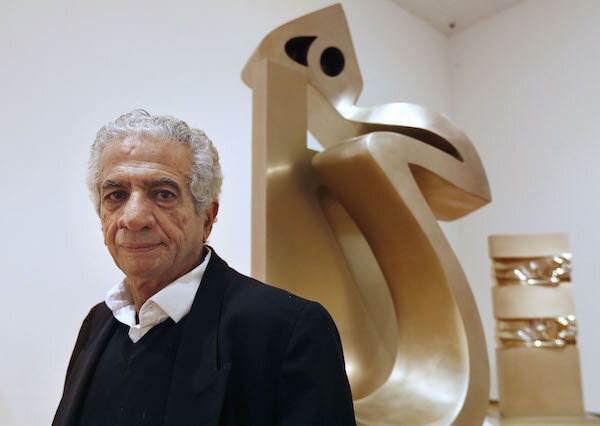 TEHRAN – Iranian sculptor Parviz Tanavoli is among the four artists and art professionals selected to be honored with Asia Arts Game Changer Awards this year.

He is also a painter and a poet, and is most famous for his iconic Heech sculpture series.

The Asia Arts Game Changer Awards is a signature event honoring visionaries across the arts field making an impact in the world.

Every year, major art collectors, artists, gallerists, dignitaries from the art world, and Asia Society trustees in India and patrons gather to celebrate contemporary art in Asia and honor artists and arts professionals for their significant contributions to contemporary art.

Tanavoli is a founding member of the Saqqakhaneh School, the first modern art movement in Iran. His practice incorporates modernist aesthetics with traditional motifs including handicrafts and Persian literature.

Tanavoli has showcased his artworks at major art centers across the world, including the Tehran Museum of Contemporary Art, Tate Modern in London,Metropolitan Museum of Art in New York, British Museum in London, Minneapolis Institute of Art and the Venice Biennale.

Numerous museums, including the Metropolitan Museum of Art, British Museum, Tate Modern and the Museum of Modern Art in Vienna, are displaying his work in their collections.

Tanavoli has devoted himself to serious studies of Iranian nomad carpets and rugs, which have been published in the books “Shahsavan Iranian Rugs and Textiles” and “Persian Flatweaves”.

Tanavoli is also known for his expansive body of works including paintings, prints, ceramics, rugs and jewelry.  In addition, the artist is a highly-regarded collector and poet.

In his latest book, “Mania for Collecting”, published this August, he tells about his passion for collecting strange and rare objects.

The Asia Arts Game Changer Awards will organize its ceremony virtually on May 20.

Uli Sigg, one of the leading collectors and champions of contemporary Chinese art, and Zhang Huan, a Chinses artist who is best known for his provocative durational performances and as a pioneering founder of the Beijing East Village group, are also among the honorees.

Photo: Iranian sculptor Parviz Tanavoli poses with a work from his Heech series in a file photo.