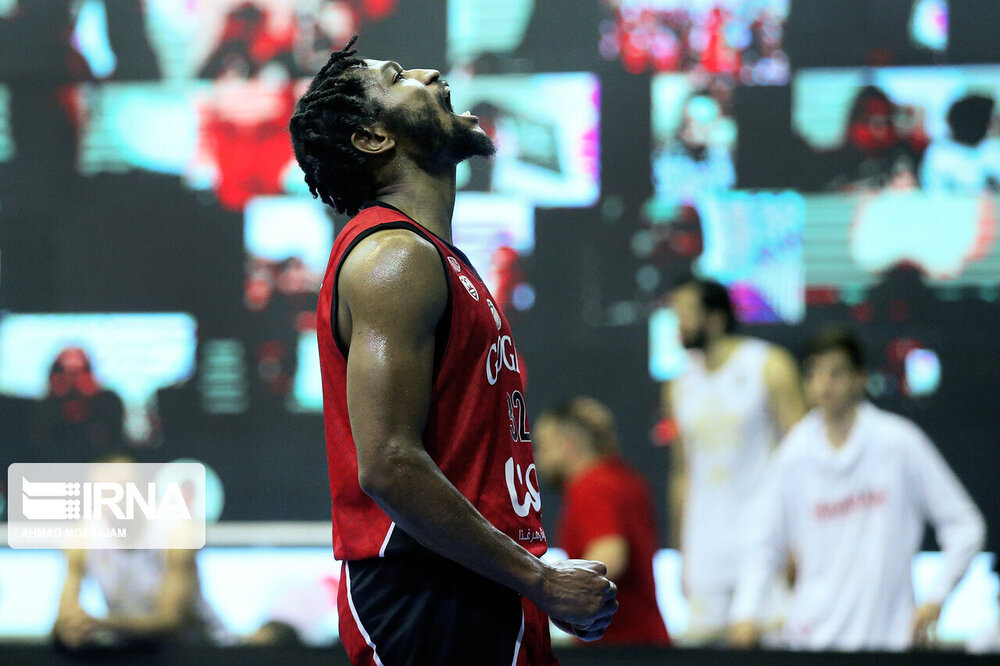 TEHRAN – Shahrdari Gorgan basketball team point guard Parish Perry Petty says that he is very happy to be in Iran since the nation is interested in basketball.

Just before the final whistle, the American player threw a long ball to tie the match at 96-96.

Shahrdari Gorgan defeated Mahram 110-103 in the five-minute overtime and claimed the title for the first time ever.

In an exclusive interview with Tehran Times, Petty revealed that he is very happy to play in Iran since the Iranians are interested in the sport.

TEHRAN TIMES: Congratulations on winning the trophy. Before talking about the final match, let us know how the Iran Basketball Super League season in general was? Considering pandemic and other issues.

-It was perfect considering what corona has done and is still doing to the world. The organizers in Tehran did an amazing job keeping the gym clean and made everything comfortable. So, it was simple for the players to feel safe and come and do their jobs. I wish we could have won it in front of our fans in Gorgan, but it still was a great season.

When did you feel assured that Shahrdari can win the trophy?

-I would say as soon as I got here. A little bit before, when I heard about the team that we had, the players that were coming with an experienced coach, in my mind I was already prepared to win the trophy. I knew that we would play well together, fight on the court. So, I just knew that because I already knew the guys. I knew we could win as long as we practice hard and play better. So, I felt assured even a little bit before I got here.

After three years of living in Iran, how do you explain the country for someone who doesn’t know Iran well?

-For the people back home or anywhere else that are unfamiliar with Iran, I would tell those people that don’t believe the things that spread in the media. Iran is a very safe place. The people here are very nice and kind, and most of the people love basketball. They’re very family-oriented people. If you don’t bother anyone, no one will bother you. Here everyone helps you; if I’m in a grocery store or a market if I need having something, people walking around might not speak English, but they try to help me already to find the things I’m looking for. Certainly, I would say that Iran is a pretty safe place, and it’s a good place to be, in my opinion. That’s why I come back every year (smiles)!

What’s your opinion about Shahrdari Gorgan coach Mehran Shahintab, and how has been your relationship with him so far?

-Shahintab is an excellent coach. He’s very good and very smart. He knows how to get the best out of each player, how to push the player’s buttons to get them to work harder and play better. I really love him because he is a competitor, just like myself. His main focus is just on winning. He doesn’t care if it’s me; if it’s the team’s best player, he doesn’t care who it is. He treats you the same way he treats whoever is not playing so much. About the coach and me, we are so competitive, and we want to win so much! For me, it’s great because I can always talk to him, and he can always talk to me. We both know this; we try to win. He can scream at me, and I may scream back, but we have so much respect for each other. At the end of the day, he’s the coach, so I’ll listen to him. I really love playing for Mehran Shahintab because he is an excellent coach and a good guy.

Let us know about the matches against Mahram in final round?

-They were challenging. Mahram are an outstanding team. Their players are amazing. The games were amazing. As you can see, the last game went overtime. For me, that’s exactly what I want in a final; I don’t want it to be easy. I prefer it to be tough, to go down to the last shots. Much respect to the Mahram club; they have very talented players, for sure, they’ll be back better every year.

Tell us about THAT magical moment? What did you think when you decided to throw the ball?

-Oh, I don’t know how to say. I feel like I’m in heaven. At that point, I thought everything was finished, and we wouldn’t win the game for sure. But that was like destiny; God wanted us to win the game for helping that shot to go in. I can’t put it out in the words how I feel because at first, I thought the referee wouldn’t count the shot, but after they counted it, it was just an amazing feeling. You know, it was only 0.3 seconds remaining, so I didn’t have much time to think. I just threw the ball as soon as it was possible. I thank God I’m still so excited.

Anything else you want to say?

To all the fans in Iran and worldwide, I want to say thank you for your support. We really appreciate it. We got the championship finally. After three years, we did it for you guys. I heard it was a long drought for 55 years with no championship for Gorgan city. I’m happy that this group of guys could bring this championship to the city of Gorgan. I can see how different the city is and how happy and joyful everyone is after our win. I want to say to all the fans, especially in Gorgan: Doosetoon Daram, I love you guys!