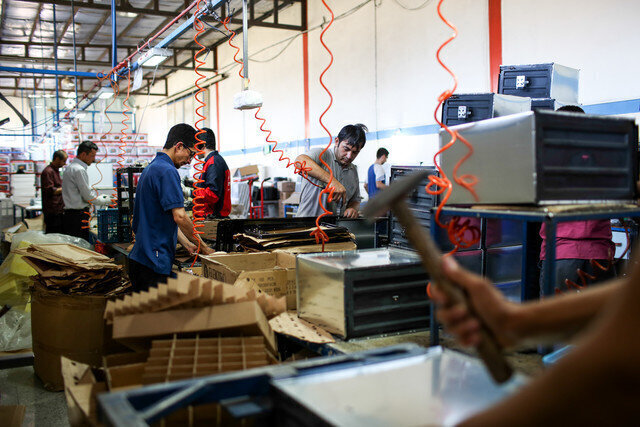 TEHRAN- As announced by Iranian Industry, Mining, and Trade Ministry, manufacturing of 16 major industrial products was increased noticeably in the country during the past Iranian calendar year (ended on March 20).

The ministry’s released data indicates that despite the severe sanctions and restrictions imposed on businesses by the coronavirus condition, 16 out of the 25 selected industrial items have seen an increase in production in the previous year due to the efforts of the country’s producers.

Last year the indigenization of the knowledge for the production of $3.2 billion worth of such equipment in various provinces was on the agenda, which increased to more than $3.5 billion, the official stated.

He mentioned investment in industrial sectors and the increasing trend of production of important industrial products as measures taken by the Industry, Mining and Trade Ministry in the previous year which was named the year of “Surge in Production” by the Leader of the Islamic Revolution Seyed Ali Khamenei.

“The country’s industrial sector was able to grow significantly in a situation where the outbreak of the coronavirus had created unfavorable conditions for the country’s productive sector; fortunately, we have witnessed a good leap in the production of products needed by people to fight this disease,” the official stressed.

Touching upon some of the major industrial growth indicators in the previous year, Sadeghi Niaraki noted that industrial investment reached more than 1.8 quadrillion rials (about $42.8 billion) in the first 11 months of the previous year (March 20, 2020-February 18, 2021), registering a growth of 225 percent.

The upward trend continued to the end of the year, he emphasized.

The official also pointed to a 23-percent increase in job creation in various industrial sectors, saying that direct employment was provided for 121,000 people during the previous year.

Niaraki also informed about the increase in production of 20 important industrial products and added: “We hope that this trend will be maintained in the current year which named the year of “Production: Support and the Elimination of Obstacles.”

Since the re-imposition of the U.S. sanctions, the Iranian Industry, Mining, and Trade Ministry was tasked to pursue a program for indigenizing the knowledge for the production of major industrial equipment.

The Leader of the Islamic Revolution Ayatollah Seyed Ali Khamenei said in October 2019 that government officials should ban the import of goods that are also produced domestically.

Back in 2019, when the mentioned program was started, the Iranian Industry, Mining, and Trade Minister at the time Reza Rahmani had said that relying on domestic production was going to save $10 billion for the country in two years.