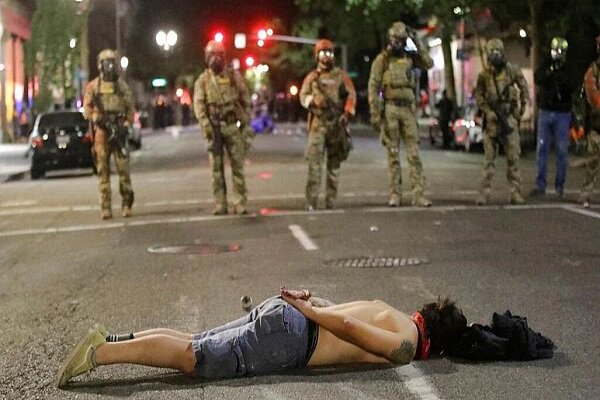 U.S. anti-racism protesters have rallied in Minneapolis as the murder trial of former police officer Derek Chauvin was taking place.

The protesters chanted “guilty” as they marched through the Minnesota city, carrying banners reading: “Justice for George Floyd. The World is watching.”
The jury went into deliberation to determine whether Chauvin is guilty of killing African American George Floyd by kneeling on his neck for almost 9 minutes last May. Deliberations resume on Tuesday.
Chauvin has pleaded not guilty to second-degree murder, third-degree “depraved mind” murder and second-degree manslaughter.
Minneapolis and state officials have ramped up security precautions in the city, in particular around the tower in which the courtroom sits. The tower is ringed by barbed wire and armed soldiers from the National Guard.
Civil rights activist Jesse Jackson joined the Minneapolis demonstrations on Monday, saying that, “Tomorrow, even if we win. It’s relief, not victory. They’re still killing our people.”
For the second-degree murder charge, 12 U.S. jurors will have to agree that prosecutors proved beyond a reasonable doubt that Chauvin committed a felony that was a substantial cause in Floyd’s death. They do not have to find that Chauvin intended to kill Floyd, according to U.S. media.
That crime carries a punishment of up to 40 years in prison.
———U.S. cities on alert
Minnesota Democratic Governor Tim Walz declared a preemptive state of emergency in the Minneapolis metropolitan area and requested security assistance from other states, citing the “threat of civil unrest.”
At a news briefing, Walz said “systemic changes” were necessary to protect Black Americans but said, “We cannot allow civil unrest to descend into chaos. We must protect life and property.”
Minneapolis has been on high alert amid protests over the fatal police shooting of a Black man in Brooklyn Center, a Minneapolis suburb, on April 11 and over the Chauvin trial verdict.