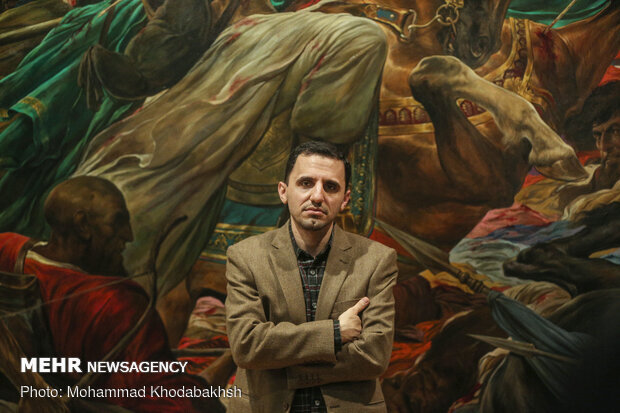 He won the title for his painting in memory of Quds Force commander Lieutenant General Qassem Soleimani who was martyred in a U.S. air raid in Baghdad on January 3, 2020.

Filmmaker Javad Afshar for his docudrama “Gando” about the spy case of Iranian-American journalist Jason Rezaian and singer Gholamreza Sanatgar for his songs “Qassem Is Still Alive” and “O Iran” were other nominees for the title.

The shortlist also included graphic designer Mohammad-Saber Sheikhrezai and writer Mohsen Kazemi for writing the memoirs of Kazem Darabi, an Iranian suspect in the 1992 Mykonos Restaurant assassinations case in Berlin, in the book “Teahouse Painting”.

Ruholamin’s paintings usually call to mind the ambiance of the Renaissance paintings. In his works, he regards stories from the history of Islam and contemporary events.

In 2017, he also created a painting of Mohsen Hojaji, an Iranian soldier who was martyred by ISIS terrorists in Syria.

In November 2016, the Tehran Museum of Contemporary Art unveiled Ruholamin’s painting “The Sky Fell Down”, a large painting featuring the last moments of the life of Imam Hussein (AS).

An exhibition of his paintings was organized at Iran’s cultural office in Paris in March 2018.

In January 2019, his collection “The Truth Is with Ali”, which contains paintings about Imam Ali (AS), was showcased in an exhibition Tehran’s Niavaran Cultural Center.

Ruholamin, 35, was nominated for the Islamic Revolution Artist of the Year award in 2018. However, he failed to win the honor that is presented every year by the Art Bureau of the Islamic Ideology Dissemination Organization.

Earlier this week, the organizers announced the final nominees to compete for the title of the Islamic Revolution Artist of the Year in 2021.

The finalists include director and screenwriter Jalil Saman, poets Afshin Ala and Ali-Mohammad Moaddab, and graphic artist Mohammadreza Doostmohammadi, and author Vahid Yaminpur.

The winner is scheduled to be announced on April 14 on the closing day of the Islamic Revolution Art Week.

The art week is organized every year to commemorate the martyrdom anniversary of documentarian Morteza Avini who was killed by a landmine in 1993 during his last trip to the former Iran-Iraq war zone in southwestern Iran while making a documentary about soldiers who were still listed as missing in action.