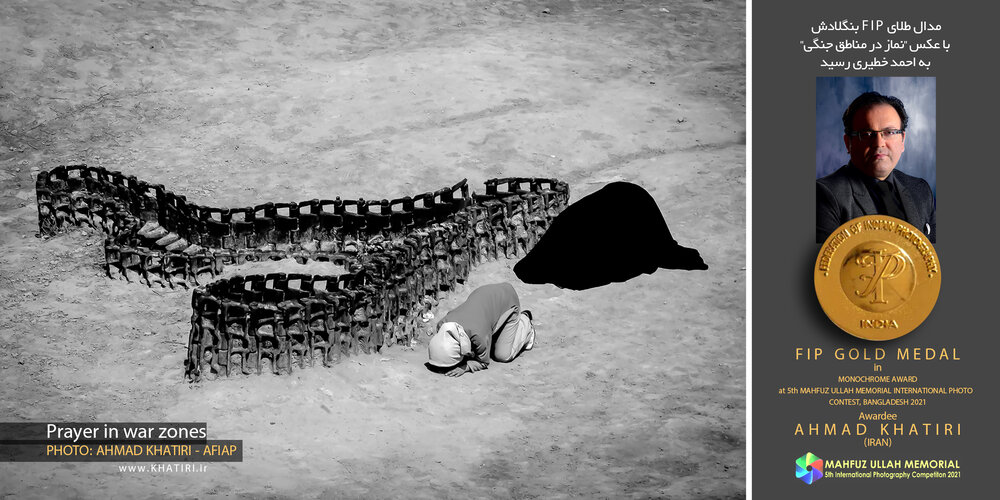 He received the honor, which is presented by the Federation of Indian Photography (FIP), for his black and white photo “Prayer in War Zones” in the mono-color category.

Khatiri’s fellow Iranian photographer Kiarang Alai also won a FIP Ribbon for his “The Mother” in this category.

The competition was organized by the Mahfuz Ullah Memorial Foundation with contributions from the Federation Internationale de l’Art Photographique (FIAP), Global Photographic Union (GPU), Bangladeshi Photographic Society (BPS) and FIP was also held in the three other categories of color, nature and travel.

Alai was also awarded a GPU Ribbon in the color section of the contest for his photo named “Grandpa”. In addition, a FIAP Honorable Mention Ribbon in this category was presented to Amir-Hossein Yusefi Keysari from Iran for his “Musical”.

An exhibition of the winning photos and awards giving ceremony will be held at Bisho Sahitto Kendra in Dhaka and April 20, 2021.

Khatiri has competed in dozens of international photography contests around the globe and won prizes in some of them.

His black and white photo named “Girl Flys in Prayer”, which depicts a little girl opening her arms like wings among a group of Muslims during a congregational prayer, was awarded an honorable mention at a contest organized by the Gruppo Operativo Fotografico Ascoli Piceno – GOFAP (Ascoli Piceno Photographic Operational Group) in Italy in 2020.

In 2009, he won the UAFB gold medal at the 7th edition of the Romania Bucovina Mileniul III International Salon of Photographic Art.

In 2017, he received the FIAP Gold Medal for his single photo “Prayer and Mourning for the Martyrdom of Their Fathers in War Zones” at the Through the Viewfinder, an international photo contest that was held in Kragujevac, Serbia.

The Fifth International Photo Salon Plovdiv in Bulgaria awarded him a PSA honorable mention for his photo “Balance” in 2018.

The 2nd Danube Digital Circuit in Belarus also gave him a FIAP Honorable Mention for a photo named “Flying Harmony” in 2018.