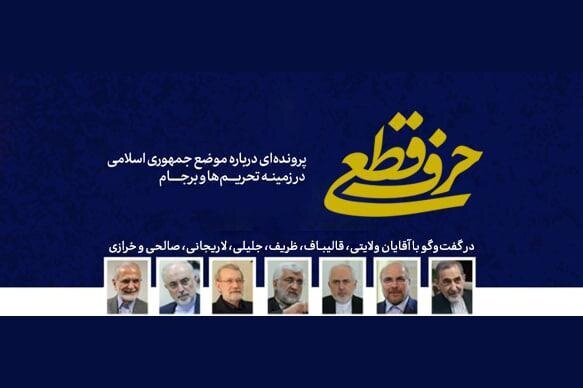 The “Definitive Talk” documentary is being broadcast with its first screening on April 8 and it aims to shed light on Ayatollah Khamenei’s announcement of the Islamic Republic’s “final and definitive talk”.

In a televised speech on January 8, 2021, on the occasion of the anniversary of the uprising of the people of Qom before the Islamic Revolution against the Pahlavi regime, as well as the anniversary of the martyrdom of Commander Qassem Soleimani, Ayatollah Khamenei discussed the speculations and debates in the political atmosphere of the country regarding the stance of the Islamic Republic towards JCPOA (the official acronym for the nuclear deal) and the commitments of the United States. According to Khamenei.ir, the “Definitive Talk” documentary will feature interviews regarding the Iran nuclear deal and the imposed sanctions on the Islamic Republic by the United States.

Amid the current political debates surrounding the Iranian society, especially regarding the economic situation, and in the run-up to the upcoming Iranian presidential elections, this documentary, as well the previous issues published by Khamenei.ir has been fulfilling the role of providing a level of political transparency through clarifying different aspects of Iran’s recent economic and political challenges.

Prior to this, the website had published a documentary featuring Ayatollah Khamenei’s visits and friendly interactions with prominent Iranian artists and filmmakers which was greatly welcomed by the general public and made global news headlines at the time.