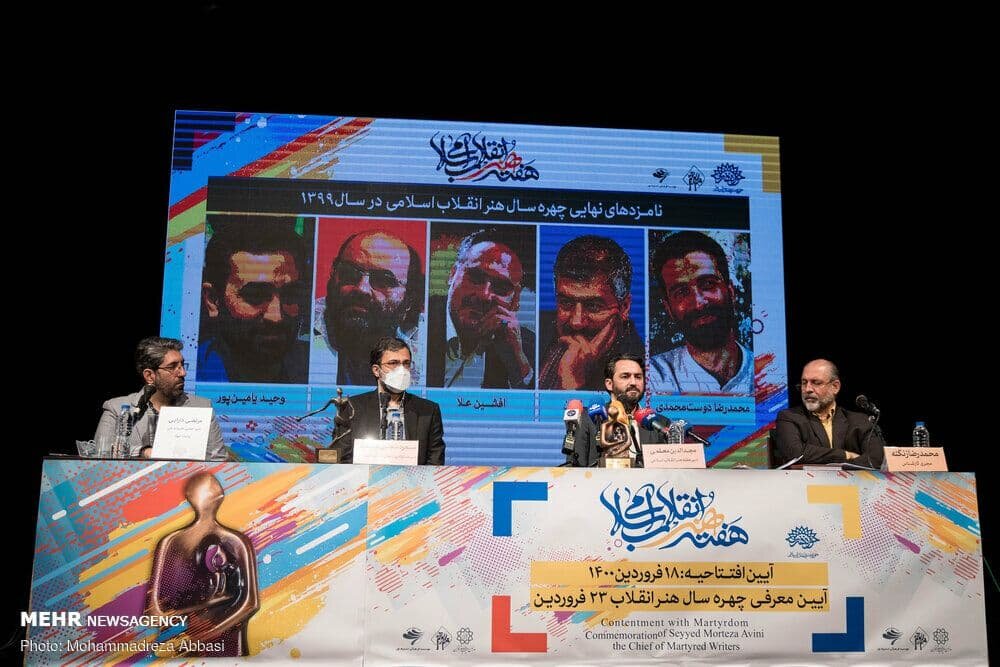 TEHRAN – Five cultural figures have be shortlisted as the final nominees to compete for the title of the Islamic Revolution Artist of the Year in 2021.

The finalists include director and screenwriter Jalil Saman, poets Afshin Ala and Ali-Mohammad Moaddab, and graphic artist Mohammadreza Doostmohammadi, and author Vahid Yaminpur, the Organizers of the Islamic Revolution Art Week announced during a press conference on Monday.

Saman has been nominated for his trilogy “Gift of Darkness”, “Butterfly” and “Breath” on the Islamic Revolution, and the popular TV series “The Antique”.

Ala has been selected for “his timely literary response to events in society and creating the poetry book ‘Sarbaznameh’ (‘Book of Soldiers’) in mourning for General Qassem Soleimani.”

Moaddab received the nomination for “his hard efforts to grow up new generation poets and writer, which are committed to the Islamic Revolution, as well as, for his timely literary response to events in society.”

Doostmohammadi was nominated for designing a number of huge posters on the Islamic Revolution and also for creating “Only for Gid’s Sake”, a comic strip representing Lieutenant-General Qassem Soleimani’s lifestyle.

Yaminpur received the nomination for “Apostasy”, an alternate history novel about the Islamic Revolution, as well as, for his travelogue of Japan “The Jinja Monk”.

The art week is organized by the Art Bureau of the Islamic Ideology Dissemination Organization every year to commemorate the martyrdom anniversary of documentarian Morteza Avini who was martyred by a landmine in 1993 during his trip to the former Iran-Iraq war zone in southwestern Iran while making the documentary “A City in the Sky” about the fall of Khorramshahr and the liberation of the southwestern Iranian city during the Iran-Iraq war.

Photo: Organizers attend a press conference at the Art Bureau in Tehran on April 5, 2021, to announced the final nominees of the Islamic Revolution Artist of the Year. (Mehr/Mohammadreza Abbasi)