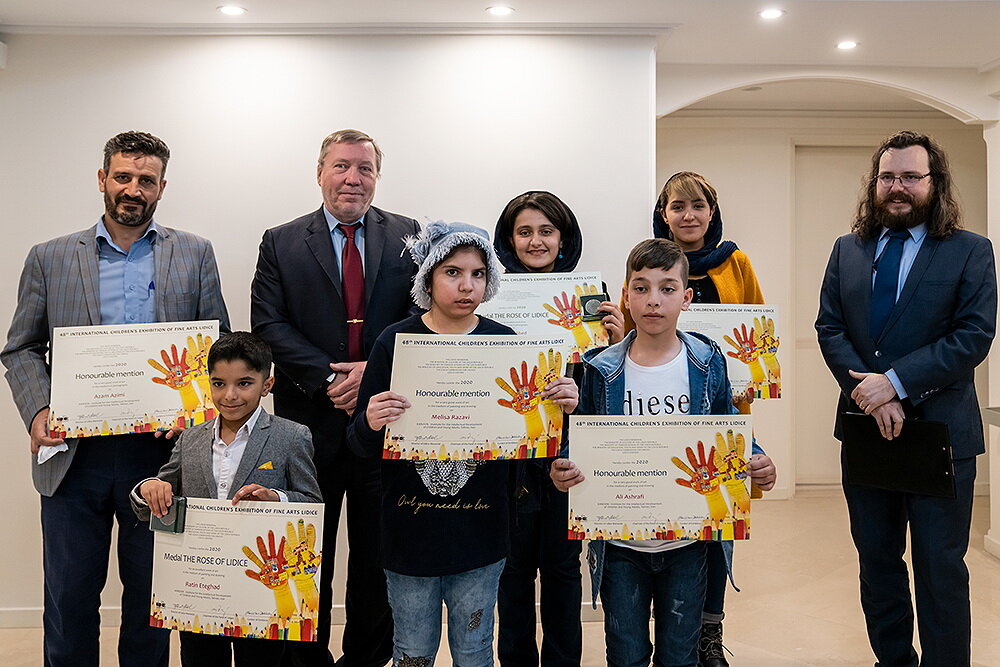 TEHRAN – The Iranian children who won awards at the 48th International Children’s Exhibition of Fine Arts Lidice received their prizes at the Embassy of Czech in Tehran on Monday from Ambassador Josef Rychtar.

In his short speech at a meeting with the children, Rychtar expressed his happiness over the Iranian children’s regard toward the ICEFA Lidice, and said that all the entries to the exhibition were of high artistic quality, Iran’s Institute for Intellectual Development of Children and Young Adults (IIDCYA) announced on Tuesday.

All the children are members of the IIDCYA.

Rychtar also said that the ICEFA Lidice received over 20,000 submissions, and the highest number of artworks were from Iranian children compared to participants from other countries.

The ICEFA Lidice was established in 1967 to commemorate the child victims from the Czech village of Lidice murdered by German Nazis, as well as all other children who have died in wars.

Although national initially, this exhibition became an international one in 1973, and since then it has become well known among children and teachers not only in the country but literally all over the world.

In recent years, more than 25,000 very good works of art have come regularly by children not only from the Czech and Slovak but also from over 60 countries, including China, India, Japan, Kenya, Malaysia, the Philippines, Sri Lanka and Zimbabwe.

Landscape was the theme of the 2020 ICEFA Lidice, during which Iranian children Ratin Eteqad, Mahta Abed, Ali Ashrafi, Melisa Razavi, Azam Azimi and Shadi Esmaeilnia were honored in various categories of the exhibition.

Ratin won a medal in the painting section while Ali and Melisa received honorable mentions in the category.

Mahta received a medal in the photography section and Azam and Shadi won honorable mentions in this section.

Photo: Czech Ambassador Josef Rychtar (2nd L) and a number of his colleagues pose with the Iranian children after honoring them with prizes of the 48th International Children’s Exhibition of Fine Arts Lidice at the Embassy of Czech in Tehran on February 22, 2021. (IIDCYA)