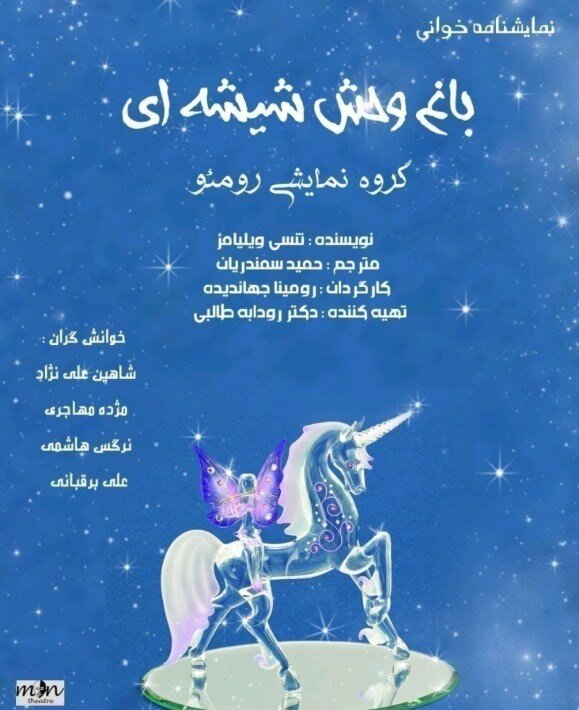 Romina Jahandideh will direct the play based on a Persian translation of the play by Hamid Samandarian, whose wife, Homa Rusta, staged it in 1972.

Shaahin Alinejad, Mojdeh Mohajeri, Narges Hashemi and Ali Barqbani are the members of the cast.

In “The Glass Menagerie”, Tom recalls scenes from his youth during the height of the Depression. It shows his mother, Amanda, trying to maintain a lost gentility in the midst of overwhelming poverty and cajoling her children into her idea of happiness.

Tom also has a crippled older sister, Laura, who resembles her collection of glass animals in her delicate beauty and fragility.

Tom works in a shoe factory to contribute to the family’s support while dreaming of becoming a poet. At his mother’s insistence, he brings a friend from work home as a possible suitor for Laura. The suitor went to high school with Laura. He is the only boy that she has ever had a crush on.

The evening turns into a disaster. After Jim leaves, Amanda scolds Tom, who runs off to join the merchant marine shortly after that disastrous night. But, as Tom tells the audience, he was never able to leave his guilt behind. So, in the end, none of them escaped from the traps in which they were caught.

The play catapulted Williams from obscurity to fame. It has strong autobiographical elements, featuring characters based on its author, his histrionic mother, and his mentally fragile sister Laura.

In writing the play, Williams drew on an earlier short story, as well as a screenplay he had written under the title of “The Gentleman Caller”.

The play premiered in Chicago in 1944. After a shaky start, it was championed by Chicago critics Ashton Stevens and Claudia Cassidy, whose enthusiasm helped build audiences so the producers could move the play to Broadway where it won the New York Drama Critics’ Circle Award in 1945.

“The Glass Menagerie” was Williams’ first successful play. He went on to become one of America’s most highly regarded playwrights.

Photo: A poster for Tennessee Williams’ “The Glass Menagerie”.