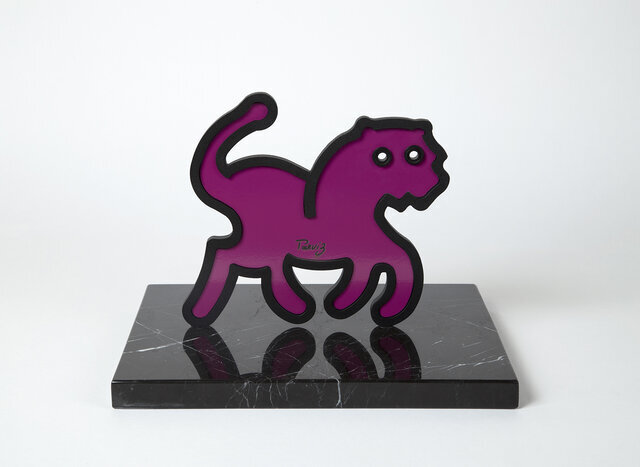 A number of his other sculptures as well as a carpet featuring a design by the artist will also go on display, the gallery announced in a press release published on Tuesday.

Photos and videos of Tanavoli’s previous exhibition at the Tehran Museum of Contemporary Art (TMCA) in 2017 in addition to photos of the tribute concert held at Vahdat Hall will also be showcased at the gallery.

Maziar Yunesi conducted the AISO, which performed a repertoire of pieces composed by Yunesi and his fellow Iranian musicians Christophe Rezai and Peyman Yazdanian.

In addition, “Cypher and Lion, Visions of Parviz Tanavoli”, a documentary by Sarvenza Alambeigi on the artistic insight of Tanavoli was screened at the opening ceremony of the TMCA exhibit.

Photos of the behind the scenes of the documentary as well as photos of the concert’s rehearsals taken by Argahavan Bustan will also be showcased at the gallery.

Also included will be a photo of Tanavoli beside his great lion taken by famous photographer Maryam Zandi, as well as a series of photos from Tanavoli’s workshop by Homeira Yaseri.

Tanavoli’s collection of “Lions” went on view at the Tehran Museum of Contemporary Art in July 2017.

About 150 artworks created by the artist with the central theme of the lion, beside his private collection of lion-themed works, as well as lion-themed ancient artifacts of Iran borrowed from different Iranian museums were displayed in the exhibition “Parviz Tanavoli and the Lions of Iran”.