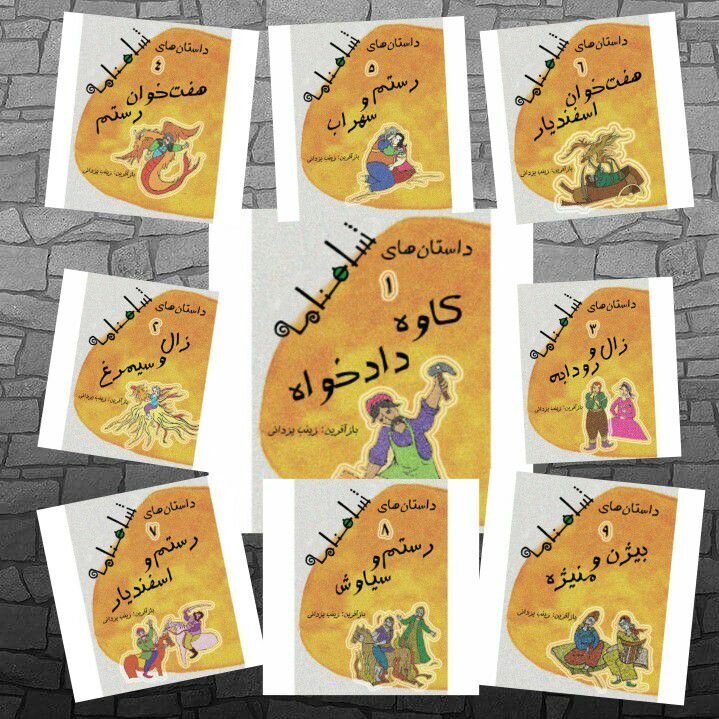 TEHRAN – Stories from the Shahnameh, the epic magnum opus of Persian poet Ferdowsi, have been simplified for children in a collection by litterateur Zeinab Yazdani.

The collection composed of nine books has been published by Tirgan, a major Iranian children’s book publisher in Tehran.

“The general characteristics of the original text should be maintained and writers should avoid any manipulation of the text when they plan to rewrite a story from the classic Persia literature,” Yazdani wrote in a preface to the collection.

“Simplifying the classic texts means to rewrite the works in modern prose to make them clear for all without a change in the original meaning,” she stated.

Yazdani has previously simplified several stories from classic Persian literature, including Masnavi-ye Manavi, Molana Jalal ad-Din Rumi. Among the books are “Parrot, the Conversable” and “Demon and Solomon”.

Masterpieces from classic Persian literature have been simplified by a number of literati over the past few decades.

Mehdi Azar Yazdi’s series “Good Stories for Good Children” stands top of the list. This collection comprised of eight books won a UNESCO prize in 1966, and was selected as Iran’s best book of the year in 1967.

In 2018, the Tehran-based publishing house Padyab released four collections of simplified stories from classic Persian literature for children in the project “The Leaves of the Green Trees”, which was coordinated by littérateur Mahmud Karimpur.

Stories from the Kelileh and Demneh abridged by Hassan Goharpur with illustrations by Maryam Zabihi were published in one of the collections.

The Kalileh and Demneh is mainly a translation of an Indian book, Penchatentra written in Sanskrit and published some 1500 years ago. The original translation was done from Sanskrit into Pahlavi (Middle Persian) by Barzuyeh. Ibn Moghafaa translated it from Pahlavi to Arabic. Finally, Nasrollah Monshi translated it into Persian from Arabic. The book contains stories about animals.

Mohsen Rahabari Torbati simplified stories from the Marzban-nameh. The book was written by Espahbod Marzban in the Hyrcanian language in the late 10th century. It was later translated into Persian by Sa’deddin Varavini during the 13th century.

“Jackal, the Donkey Rider”, “The Predatory Cat” and “The Rooster and Fox” were selected for another collection, which has been illustrated by Zabihi.

A collection also contains the stories “The Elephant in the Dark”, “Escape from Death” and “Mr. Morad and the Sweet-Talker” from the Masnavi-ye Manavi. The stories have been streamlined by Abdoljalil Karimpur. Saeideh Nosratifard is the illustrator of the collection.

Another collection carries stories from the Gulistan (The Rose Garden), Sadi’s masterpiece, which have been simplified by Pegah Sadeqi.

“The Salt of Food”, “Greed” and “The Classroom” have been selected for the collection illustrated by Nosratifard.