TODAY'S ALL NEWS
Previous Breaking: Envoy to UN: Iran has to verify any US step to undo Trump’s wrongs
Next Breaking: “Holodomor” reveals how Stalin starved millions in Ukrainian famine 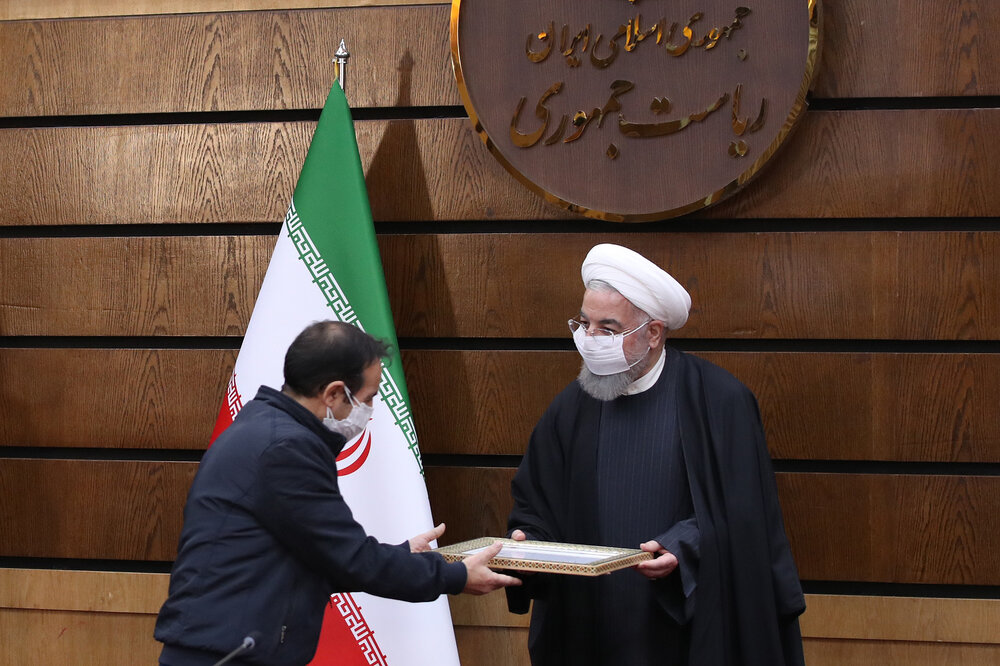 TEHRAN – Winners in different categories of the 38th Iran’s Book of the Year Awards were honored as they received their awards from President Hassan Rouhani during a special ceremony at his office on Saturday.

In the Art category, the Persian translation of Angelos Koutsourakis’ “The Cinema of Theo Angelopoulos” by Vahid Ruzbehani won the award for best book on dramatic art issues.

“Myth of Rasta” by Farshad Fereshteh-Hekmat was selected as best play section.

In the Visual Arts section, “Kubacheh Pottery” by Firuz Mahjur and Erwin Panofsky’s “Perspective as Symbolic Form” translated into Persian by Mohammad Sepahi won the award.

In the Literature category, “Mid-Day Incantations” by Mansur Alimoradi was selected as best novel, and the award for best Literary Criticism went to “History of the Body in Literature” by Seyyed Mehdi Zarqani and colleagues.

The award for best Translation was shared by  Maria Nikolajeva’s “Aesthetic Approaches to Children’s Literature: An Introduction” translated into Persian by  Mehdi Hejvani and Fatemeh Zamani, and “An Introduction to Contemporary American Poetry” by Kamran Ahmadgoli and Bahdor Baqeri.

“Epic of Musayyebnameh” written by Mohammad-Baqai Vars Bukhari and Abu Taher Tarsusi, and translated and corrected by Milad Jafarpur won the award for best old text.

In the Physical Education section, the award was given to the Persian translation of Claude Bouchard’s “Claude Bouchard’s “Molecular and Cellular Regulation of Adaptation to Exercise” translated into Persian by Abbas-Ali Gaini, Javad Tolueiazar and Mohammad Hemmatinafar.

Speaking at the ceremony, Rouhani said that if there were no books, one’s connection with the past would be cut.

“We have inherited our cultural heritage from our ancestors but nothing can replace them like books, and our spiritual treasures are preserved in books,” the President said.

“Books bear precious treasure from the past. We can find more about the scientist and scholars from what they have written or from what others have written about them, and if there were no books, there would be a great loss,” he remarked.

Photo: A winner accepts his award from President Hassan Rouhani during the 38th Iran’s Book of the Year Awards on February 20, 2021. (President.ir)