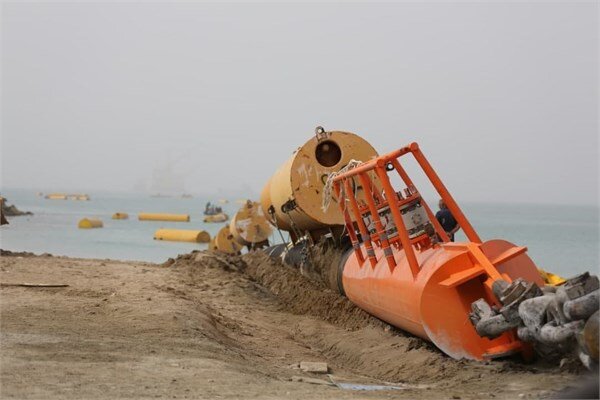 TEHRAN- The construction of the second 36-inch offshore oil pipeline of the Jask crude oil export terminal has been completed, the operator of Jask oil terminal project in southern Iran announced.

According to Vahid Maleki, the construction of the mentioned pipeline was started immediately after the completion of the first pipeline in late January and the project was completed on Friday on schedule, Pars Oil and Gas Company (POGC) reported.

Maleki put the total physical progress of the Jask Oil Terminal early-phase at 82 percent, saying: “With the completion of these two offshore pipelines, in the coming days, it will be possible to install the project’s first single point mooring (SPM) system which is currently loaded in the Khorramshahr industrial yard.”

The construction of the first SPM system of the Jask crude oil export terminal was completed last week and the SPM has been loaded and ready to be shipped toward its designated point in the Gulf of Oman waters.

According to the official, the capacity of this SPM system is 7,000 cubic meters per hour (equivalent to one million barrels per day).

As the country’s second major oil terminal, Jask terminal is under construction by POGC on 60 hectares of land and with nearly €260 million of investment.

In line with the development of the mentioned oil terminal, a pipeline project, dubbed the Goreh-Jask oil transfer project, is also underway which is going to provide Iran with an alternative route for the country’s crude oil exports that are currently carried out through the Strait of Hormuz.

According to the deputy director of the project in Petroleum Engineering and Development Company (PEDEC) the progress of the first phase of the strategic Goreh-Jask oil pipeline project has also surpassed 70 percent.

Ali Jafarzadeh said that such progress promises that the project will be completed by the end of the current Iranian calendar year (March 20).

Despite the tough condition created by the sanctions and also coronavirus outbreak, this strategic project will be completed at the scheduled time, he underscored.

Jafarzadeh announced the supply of more than 96 percent of the parts and equipment of this project from domestic sources and said: “This is an all-Iranian project and a high percentage of items required for this national project is supplied by the domestic companies.”

Back in December 2020, the managing director of PEDEC had announced that the implementation of Goreh-Jask project by domestic contractors has saved the country over €500 million.

Touraj Dehqani said that the implementation of the project so far has created direct jobs for 8,000 people while providing indirect job opportunities for over 15,000 people as well.

Dehqani stated that the first phase of this project with a capacity to transfer over 300,000 barrels of crude oil per day will be ready for operation by the end of the current Iranian calendar year.

So far, more than 780 kilometers (km) of pipes have been delivered to the site and more than 400 km of piping has been carried out, the official said at the time.

According to the plan, the entire pipeline, which is about 1,000 kilometers, will be installed, tested, and operational by the yearend, he added.

Goreh-Jask project, which is aimed at expanding the oil transport capacity in the south of the country to one million barrels a day, was inaugurated in late June 2020 by President Hassan Rouhani.