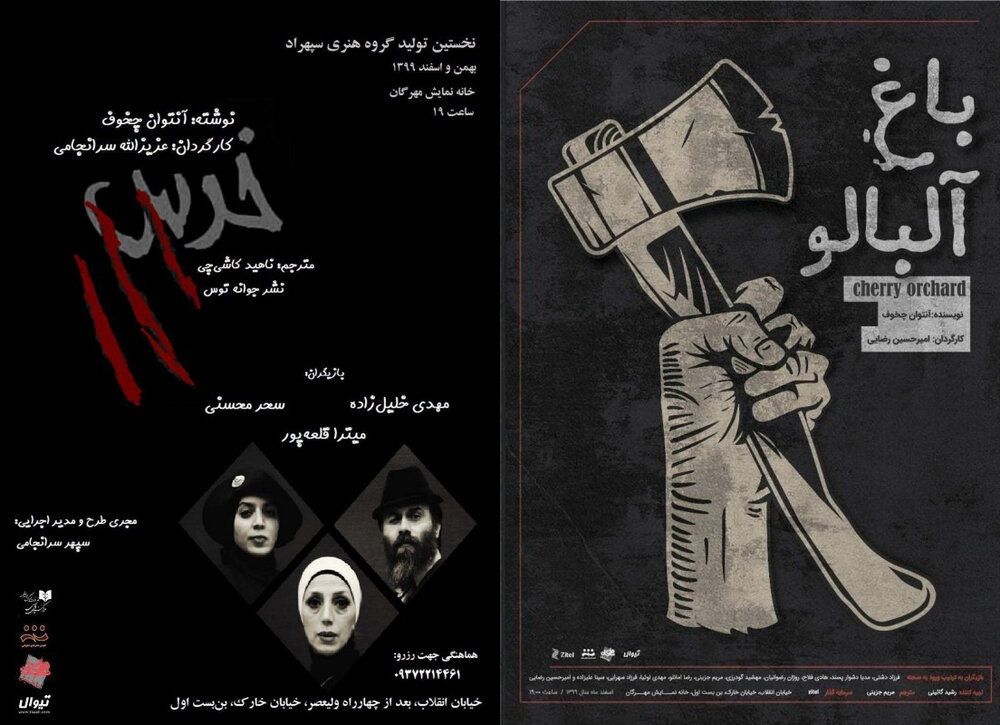 TEHRAN – Russian dramatist Anton Chekhov’s plays “The Cherry Orchard” and “The Bear” are on stage at the Mehregan Theater in Tehran.

Director Amir-Hossein Rezai’s troupe is performing Chekhov’s 1903 play “The Cherry Orchard” at Hall 1 of the theater.

Starring Farzad Dashti, Media Doshvarpasand, Hadi Fallah, Rojan Rezvanian and Reza Amanlu, the play is being performed based on a Persian translation by Maryam Jazini.

The play revolves around an aristocratic Russian landowner who returns to her family estate, which includes a large and well-known cherry orchard, just before it is auctioned to pay the mortgage.

Unresponsive to offers to save the estate, she allows its sale to the son of a former serf; the family leaves to the sound of the cherry orchard being cut down.

The story presents themes of cultural futility – both the futile attempts of the aristocracy to maintain its status and of the bourgeoisie to find meaning in its newfound materialism.

It dramatizes the socio-economic forces in Russia at the turn of the 20th century, including the rise of the middle class after the abolition of serfdom in the mid-19th century and the decline of the power of the aristocracy.

Hall 2 of the theater is also hosting theatergoers for “The Bear: A Joke in One Act”, another of Chekhov’s plays, also known as “The Boor”.

It is a one-act comedic play, which was originally dedicated to Nikolai Nikolaevich Solovtsov, Chekhov’s boyhood friend and director/actor who first played the character Smirnov in the play.

The play takes place in the drawing room of Elena Ivanovna Popova’s estate exactly seven months after her husband’s death. Since her husband died, Popova has locked herself in the house in mourning. Her footman, Luka, begins the play by begging Popova to stop mourning and step outside the estate. She ignores him, saying that she made a promise to her husband to remain forever faithful to his memory. Their conversation is interrupted when Grigory Stepanovitch Smirnov arrives and wishes to see Elena Popova.

Azizollah Saranjami is the director of the play starring Mehdi Khalilzadeh, Sahar Mohseni and Mitra Qalepur.

Photo: Posters for the plays “The Cherry Orchard” and “The Bear”.