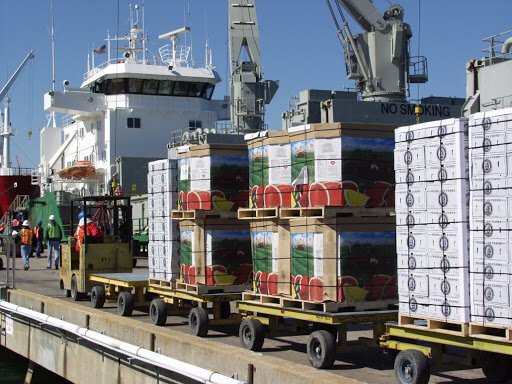 Put into operation in the 51st series of inauguration ceremonies in the current Iranian calendar year (started on March 20, 2020), the terminal is covering 31,000 hectares of land in the city of Jouybar.

Marketing, exporting products, creation and introduction of Iranian brands in global markets, reforming the distribution system and regulation of the market of agricultural products are reported to be among the primary goals of the mentioned export terminal.

Speaking in the opening ceremony, the terminal’s Head Khalil Gholizadeh said the first phase of this export terminal with a capacity of more than 364,000 tons has different sections for sorting and packing fruits, producing carton boxes, and freezing protein materials and has created direct jobs for 300 people.

Gholizadeh considered the regulation of the market of agricultural products, especially horticulture products, as one of the most important advantages of this terminal and called for the support of public and private banks in providing working capital for the country’s agricultural units.

As announced by an official with the Islamic Republic of Iran Customs Administration (IRICA), the value of the country’s agricultural products export has risen 8.4 percent during the first ten months of the current Iranian calendar year (March 20, 2020 – January 19, 2021), compared to the same period of time in the past year.

Mehrdad Jamal Orounaqi, the IRICA deputy head for technical and customs affairs, put the value of exported products at $4.9 billion in the ten-month period of the present year.

The official said the weight of agricultural products exported in the mentioned period has risen 25.9 percent to stand at 7.085 million tons.

He said that Iran had exported 5.6 million tons of agricultural products worth $4.5 billion during the first ten months of the previous year.

Details of agricultural exports in the period under review show that 2.4 million tons with a value of more than $2.1 billion are allocated to the 10 major agricultural products, which in terms of value pistachio is at the top of them.

According to Orounaqi, eight countries were the export destinations of the 10 major exported products which shows that there is a wider distribution than before in the export of these items between countries.

Iran exported over $5.8 billion worth of agricultural and foodstuff products in the previous Iranian calendar year (ended on March 19, 2020), the Head of Agriculture Ministry’s Planning and Economic Affairs Department Shahrokh Shajari has announced.

According to the official, about 7.104 million tons of such products worth $5.821 billion were exported to foreign destinations last year.

In the mentioned period, over 6.941 million tons of agricultural and foodstuff products worth $6.392 billion were also imported into the country, according to Shajari.