Breaking: “Fear and Misery of the Third Reich” coming to Tehran 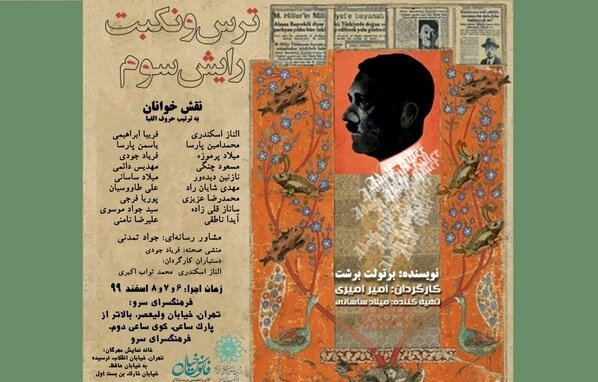 Breaking: “Fear and Misery of the Third Reich” coming to Tehran

TEHRAN – Reading performances of German playwright Bertolt Brecht’s “Fear and Misery of the Third Reich” will be held in Tehran at Mehregan Theater and Sarv Cultural Center.

Milad Sasani is the producer of the reading performances, which will be directed by Amir Amiri on Saturday at Mehregan Theater.

The play will be read at the Sarv Cultural Center on February 24, 25, and 26, while it will be repeated at Mehregan Theater on March 6.

Brecht’s series of twenty-four interconnected playlets describe events that took place in ordinary German households in the 1930s. They dramatize with clinical precision the suspicion and anxiety experienced by ordinary people, particularly Jewish citizens, as the power of Hitler grew.

Written in exile in Denmark and first staged in 1938, it was inspired in part by his trip to Moscow where he had been researching tasks for the anti-Nazi effort.

Brecht is acknowledged as one of the great dramatists whose plays, work with the Berliner Ensemble and critical writings have had a considerable influence on the theater.

Brecht was one of the twentieth century’s most influential theater artists. He was the main proponent of the genre named epic theater.

His landmark plays include “The Threepenny Opera”, “The Life of Galileo”, “Mother Courage and Her Children” and “The Caucasian Chalk Circle”.

Photo: A poster for the reading performances of German playwright Bertolt Brecht’s “Fear and Misery of the Third Reich” at Mehregan Theater and Sarv Cultural Center in Tehran.