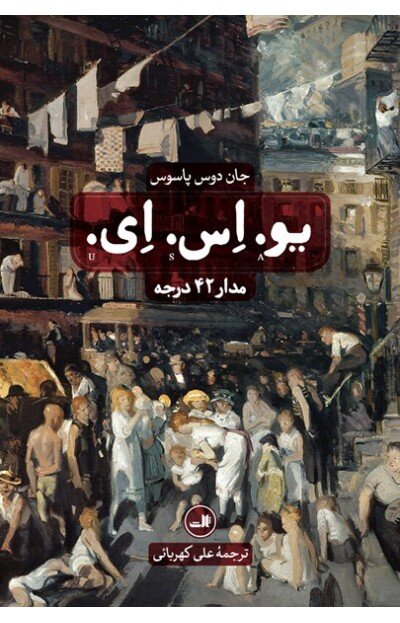 TEHRAN – A Persian translation of American novelist John Dos Passos’ “The 42nd Parallel” from the U.S.A. Trilogy has recently been published in Persian in Tehran.

Ali Kahrobai is the translator of the book released by the Saless publishing house.

With his U.S.A. trilogy, comprising “THE 42nd Parallel”, “1919”, and “The Big Money”, Dos Passos is said by many to have written the great American novel.

While Fitzgerald and Hemingway were cultivating what Edmund Wilson once called their “own little corners,” Dos Passos was taking on the world. Counted as one of the best novels of the twentieth century by the Modern Library and by some of the finest writers working today, U.S.A. is a grand, kaleidoscopic portrait of a nation, buzzing with history and life on every page.

The trilogy opens in 1930 with “The 42nd Parallel”, where we find a young country at the dawn of the twentieth century. Slowly, in stories artfully spliced together, the lives and fortunes of five characters unfold. Mac, Janey, Eleanor, Ward, and Charley are caught on the storm track of this parallel and blown New Yorkward. As their lives cross and double back again, the likes of Eugene Debs, Thomas Edison, and Andrew Carnegie make cameo appearances.

Over his long and successful career, Dos Passos, most notable for his U.S.A. trilogy, wrote 42 novels, as well as poems, essays and plays, and created more than four hundred pieces of art.

Dos Passos used experimental techniques in the trilogy, incorporating newspaper clippings, autobiography, biography, and fictional realism to paint a vast landscape of American culture during the first decades of the 20th century.

Though each novel stands on its own, the trilogy is designed to be read as a whole. Dos Passos’ political and social reflections in the novel are deeply pessimistic about the political and economic direction of the United States, and few of the characters manage to hold onto their ideals through the First World War.

The novel reflects the author’s sympathy, at the time of writing, for the Industrial Workers of the World (IWW) and his outrage at its suppression, for which the book expresses a deep grudge for President Woodrow Wilson.