Breaking: The American riots: A vertical trench in process 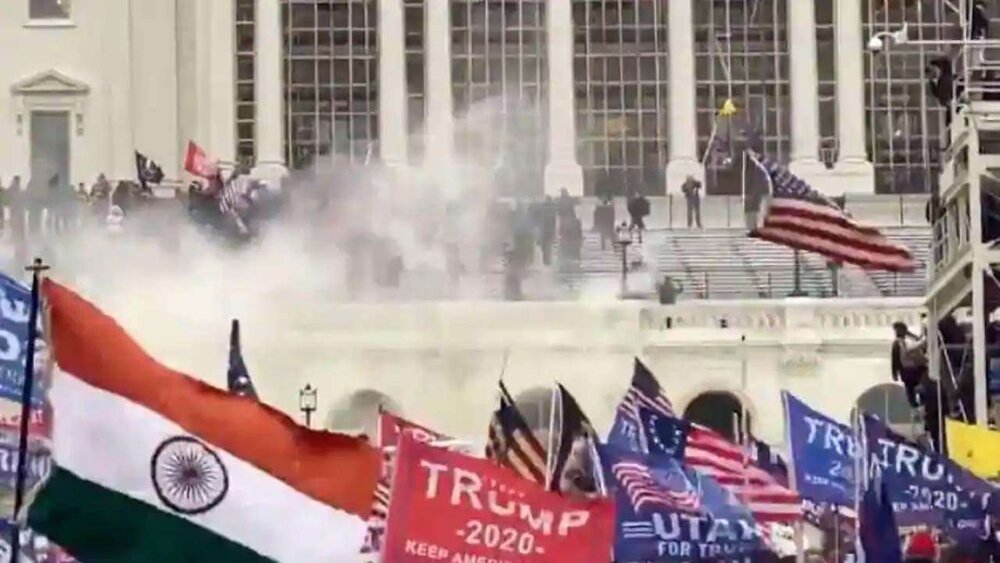 Breaking: The American riots: A vertical trench in process

On Wednesday evening, it was not the first time that Americans poured into the streets in protest. However, a long time has not passed since the world has witnessed that rioters and demonstrators assaulted the symbol of American democracy: The Capitol.

It is an irony! When the riots filled the Arab streets in several countries, they were identified as the “revolutionaries”. The rioters were assaulting governmental buildings and national symbols of the states, but it was portrayed under the name of democracy and freedom of speech by the Wild West. While the American riots were immediately branded by Europe and Western officials as chaotic anti-democratic behavior.

During the last 10 years, the rioters have filled the Arab streets and attacked government buildings, stolen documents, and burned them, especially in Syria and Libya. The two countries were initially targeted by the Wild West to change regimes and the system in the name of “democracy” and the West was anticipating the moment to attack like a predator.

The same irony brings back the role played by the media, in particular Al-Jazeera and Al-Arabiya, and many others. The media has played a major role in advocating for the rioters and demonizing the opponents of radical behaviors. This role was also perfectly executed by the Western media in supporting the riots against the government institutions in the Arab countries. In reverse, the same American media is pushing towards demonizing their incumbent president and its supporters because they attacked the Capitol, the temple of the American democracy. And now they are pushing towards the impeachment of their president for instigating it.

The impeachment of Trump looks as humiliating as the impeachment of president Gaddafi in the same media, with the exception that in the U.S. the riots on the Capitol were a real version of what was going on, whereas the scenes that were transmitted by Al-Jazeera and many others were costume made.

The American media is now promoting more than 200 bills waiting to be examined by Congress. All of them were set to criminate Trump and isolate him. Trump was always identified as silly, shallow, and arrogant, even though the American media role is best described as an attempt to bully the man and his partisans. Whether we like the man or not, Trump was supported by around 75 million Americans in the elections, who believed that it was about time to make America great again.

After all, he is just another American president that led the American policy to the best interest of the American lobbies that enabled him to reach his position. Electing Trump in 2016 was the beginning of the end to the American system and democracy as we know it. Accordingly, the attack on the Capitol is a sign that the temple is about to fall down!

American democracy is proved to be a masquerade beyond doubt.  Our region has been suffering from it, as well as different countries in the world, especially Latin America. The Americans worked excessively on toppling down elected governments that did not match their policies.

In addition, it seems that the situation is going to be escalated in the coming days. Even though Trump is no longer able to tweet on social media, his partisans are tweeting for another rally during Biden’s inauguration ceremony as the U.S. president. Besides, the U.S. media are promoting the impeachment of the president.

There is a miscomprehension of the danger of the impeachment on the American society, which is now vertically divided. After the impeachment, the vertical crack will become deeper and weaken America furthermore. For this reason, the Wall Street Journal has accused Nancy Pelosi, the speaker of the House of Representatives, of planning a coup against the president by demanding the chief of staff to refuse to execute Trump’s orders. The journal was wondering “what if the U.S. was under nuclear attack?”

In addition, the radical right-wing groups are calling for more escalation and plan to attend the demonstrations with their guns. What would this lead to? Actually, to one of two following results: the first one would be intimidating other national groups whether they were the middle or the left wings. Secondly, clashing with the authorities, if they try to stop them or arrest them for disturbing the peace.

In either way, this would mean that the U.S. is on the verge of civil war.

Over the last ten years, there have been several calls for separation from different American states. They have even gone to federal courts, but they have failed. Hence the intent to divide America is present in the Americans’ minds. This cry for division shows how much incohesive the American social tissue is, even before Trump. Add to that that racism is rising within American society but in reverse.

Nowadays, there is a rising sense of unfairness among the White Anglo Saxon Protestants [WASPs], who initially immigrated to America believing that it was the Promised Land, which was once again occupied by the inferior subjects that the WSPs had imported in the first place as their servants and slaves. It seems that the inferior subjects proved to be smart and hard-working and reached the highest positions leaving God’s chosen people behind.

Therefore, the slogans made during Trump’s campaigns that “Let us make America great again”, or in his declaration that he will go national instead of international, were most appealing to Trump’s partisans, amongst them the WASPs that constitute the majority. However, the slogans went against the deep state’s goals, especially the World Bank, the International Monetary Fund, and transnational corporations, and many others. The latter was highly affected by the economic sanctions applied by Trump.

It is clear that Trump’s slogans and behavior were an embarrassment for his vice president Mike Pence and the Republican Party. However, they betrayed him. Many of Trump’s partisans, who elected them to the House of Representatives, feel that they were betrayed as well. Accordingly, the Republicans will need to work harder than ever to gain the trust of their voters again. Therefore, the announcement by Donald Trump junior that now they need to reconstruct the Republican Party again, is a serious message to be considered, since the impeachment of Trump will not go without consequences in the American streets. And his partisans are unlikely to slow down.