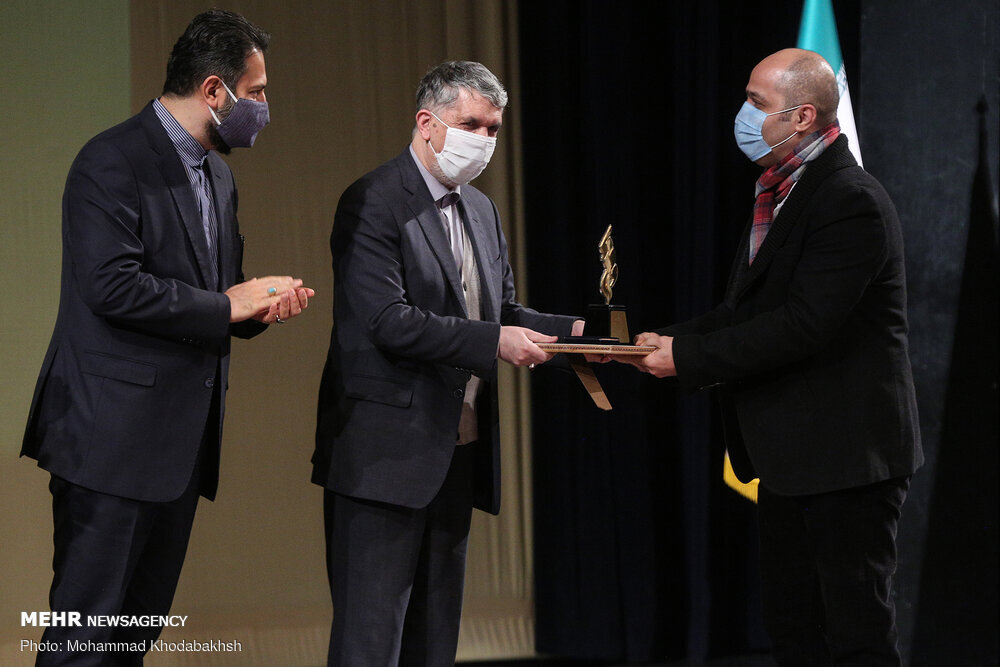 TEHRAN – The winners of the Depiction of the Soldier Photo Competition were honored on Saturday during a ceremony held at the Vahdat Hall in Tehran.

Minister of Culture and Islamic Guidance Seyyed Abbas Salehi was among the guests attending the honoring ceremony.

Organized by the Rudaki Foundation, the competition covered several topics including jihad, martyrdom, national and international activities, and social activities, as well as Commander Qassem Soleimani and his funeral ceremony across the country.

Mehdi Qasemi from Tehran with his photo of Commander Soleimani and Jihad Mughniyeh, the son of Hezbollah’s former head of operations, at the funeral ceremony of Soleimani’s mother took first prize.

Hassan Yarahmadi from Kerman took second prize for his photo of the funeral ceremony of Soleimani in his hometown Kerman.

Ahmad Balbasi, Majid Asgaripur, Puya Bazargard and Javad Mirhosseini were also photographers who were honored at the ceremony.

Hamid Forutan presided over the contest and Saeid Faraji, Farhad Soleimani and Ruhollah Vahdati were the members of the jury.

Speaking at the ceremony, Forutan said that the Rudaki Foundation organized the contest in memory of Hajji Qassem as a tribute to the commander.

“The photos with the central theme of the commander will remain as a precious treasure for the great Iranian nation, and the competition was held on the first death anniversary of the commander,” Forutan added.

The Art Bureau in Tehran has also organized a contest named “Sarve Ravan Photo Competition”, as people’s love of Soleimani is the main theme.

Photos of the personal ceremonies that were held in homes by his fans to commemorate the first martyrdom anniversary of Soleimani during the COVID-19 era, and the decorations of the cities and the villages during such ceremonies are eligible for the contest. The top works will be awarded in April 2021.

Photo: A winner accepts his award from Minister of Culture and Islamic Guidance Seyyed Abbas Salehi (C) at the Depiction of the Soldier Photo Competition at Vahdat Hall in Tehran on January 9, 2021. (Mehr/Mohammad Khodabakhsh)