TODAY'S ALL NEWS
Previous Breaking: 24 idle mines to be revived in southwestern province
Next Breaking: Over 1,795km of flood-damaged main roads reconstructed 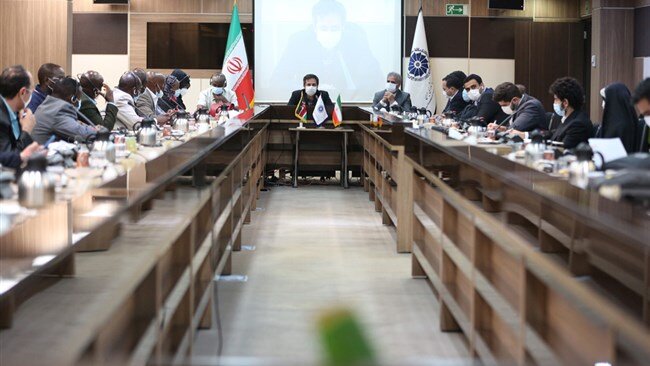 TEHRAN – Iran Chamber of Commerce, Industries, Mines and Agriculture (ICCIMA) hosted a meeting with a trade delegation from Kenya’s Bomet County on Tuesday in which the two sides discussed cooperation in various sectors including renewable energies, water, and agriculture.

The meeting was attended by officials from the two sides including Bomet Governor Hillary Barchok, and the Iranian Ambassador in Kenya Jafar Barmaki, as well as representatives of private companies from the two countries, the ICCIMA portal reported.

Speaking in the meeting, Barmaki pointed to the existing capacities and facilities in the African country and announced the establishment of an innovation center in Kenya by the Iranian Vice Presidency for Science and Technology.

Barchuk, who headed the Kenyan delegation, also mentioned the appropriate areas of cooperation between the two countries, noting that Kenya, with its smooth agricultural lands, could be a good destination for investors in this field.

“About 80 percent of the country’s land is arable, and 60 percent of Kenya’s tea is currently produced in Bhutan,” she said.

“Agriculture in Kenya which is still done in a traditional way can be developed with the help of Iranian experiences and technology. On the other hand, the country welcomes investors in the field of packaging and value creation,” Barchok stressed.

“We believe that the two countries can work together to take over the markets in their regions,” she added.

Elsewhere in her remarks, the official pointed to the challenges of this country in the field of water and energy, the high cost of electricity, and the lack of proper storage systems for storing agricultural products, and said: “Kenya hopes to work together to solve its problems.”