Breaking: Trump has shown his hand, nothing in his back pocket 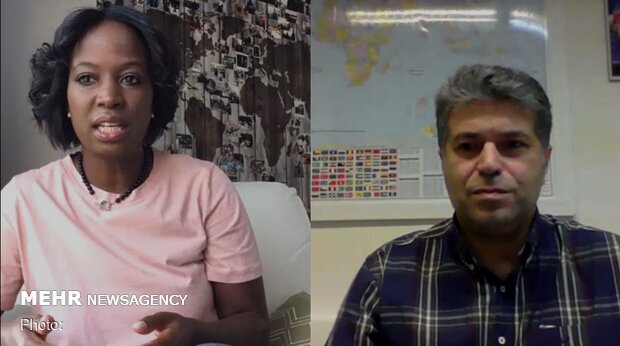 Breaking: Trump has shown his hand, nothing in his back pocket

TEHRAN– Caesar-Chavannes in an interview with MNA talked of challenges to U.S. democracy, approaches of Dems and Reps parties toward racism, the role of money in the country’s power structure, and Trump’s tactics to win the election.

The U.S. presidential election is scheduled for November 3, during which 74-year-old Republican Donald Trump will compete with 77-year-old Democrat Joe Biden to determine the forty-sixth U.S. president.

2020 U.S. presidential election is approaching a critical stage as November approaches, and Trump’s positive test for coronavirus has added to the complexity of this competition. On the other hand, the issue of fraud in the U.S. election is still raised by both U.S. candidates, Joe Biden and Donald Trump. The press published a number of articles containing speculation that Donald Trump might not accept the final election result.

This election has also challenged Donald Trump and Joe Biden in the field of foreign policy issues, including the U.S. policy towards the West Asia, the ways to fight against coronavirus, the racism issues, and etc.

Meanwhile, some analysts believe that Donald Trump is an unpredictable person and he will have a game-changing card to win the election, but in this regard, Celina R. Caesar-Chavannes, a Canadian politician and former Member of Parliament in an interview with Mehr News Agency said, “Not only Trump is not unpredictable, but he has also even shown his hand.”

Following is her interview in which she shared her views on the U.S. Presidential Election and the possible effects of its result on U.S. policies.

Celina R. Caesar-Chavannes, a Canadian politician and former Member of Parliament for the riding of Whitby in the House of Commons of Canada from 2015 to 2019.